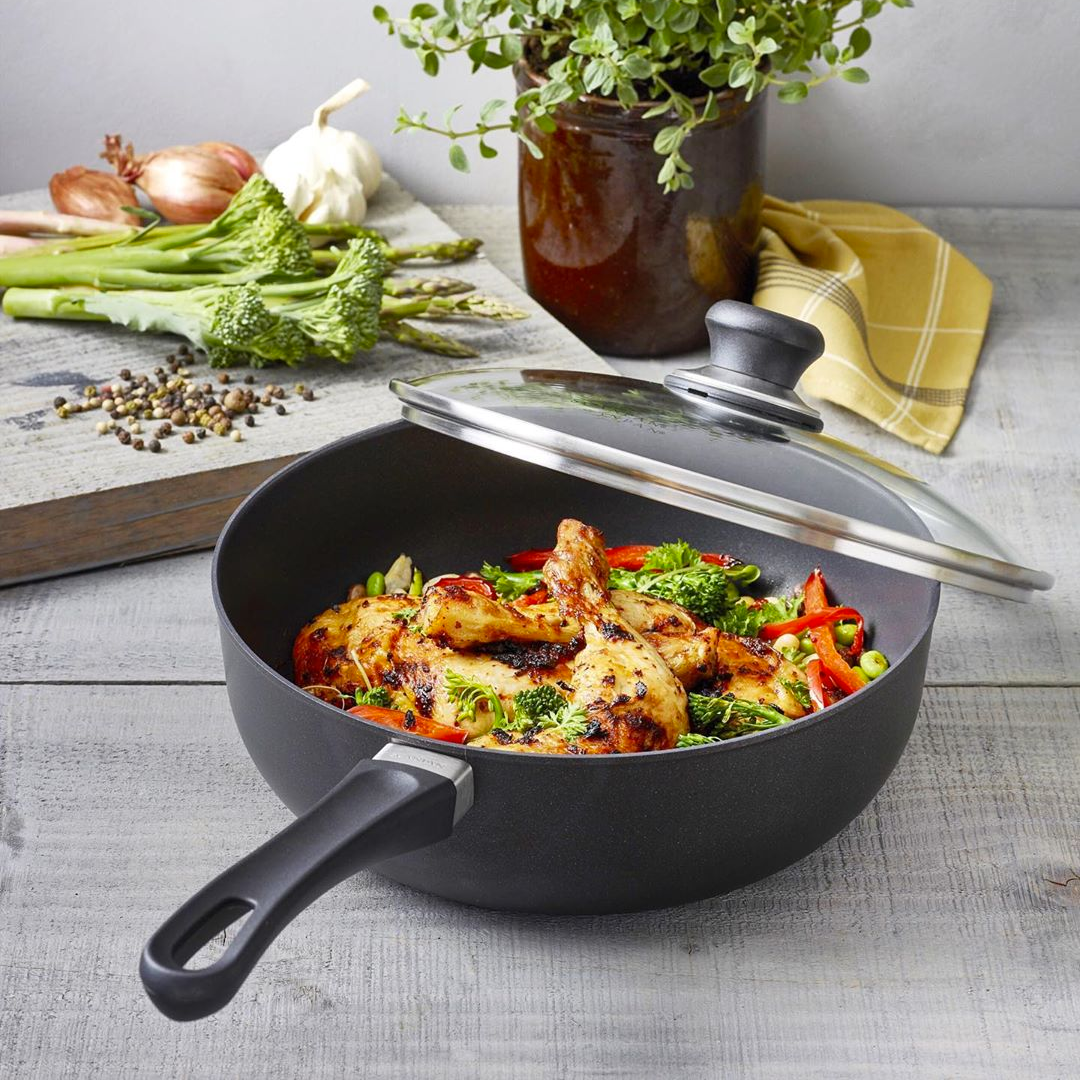 SCANPAN is built on a rich and interesting history. The very first pressure cast frying pan was actually a failed attempt by inventor and businessman G.A.L. Thorsen to create a pressure cooker in 1956. Though he didn’t succeed at making a pressure cooker, Thorson’s would be pressure cooker lid became the inspiration for the first frying pan. It was created with scrap aluminium which was cheap due to the old discarded planes from WW11. One of the original aluminium presses remains in use in SCANPANS current factory in Ryomgaard, although the manufacturing process has been significantly improved and revolutionised since then.

During the 1960s SCANPAN expanded its product range and entered the Danish household kitchens. Not only was SCANPAN manufacturing non- stick frying pans, but also apple dumpling pans, waffle irons and baking tins. The kitchenware was sold under the name and slogan: “The discerning housewife’s favourite kitchenware”.

During the 1970s demand for these Danish frying pans continued to grow. The factory moved from Lystrup to Ryomgaard on Djursland in 1976. The pans were ball polished with beeswax to get a completely smooth surface. Although the technique was radically improved, SCANPAN continues to finish our pressure cast frying pans with Danish beeswax to this day.

In the 1980’s the love of SCANPAN grew outside of Denmark, turning the heads of German housewives, who became the brands biggest market. They adored SCANPAN frying pans due to their uniquely flat bottom.

In 1986 SCANPAN had a breakthrough inspired by the space industry’s titanium heat shields. A new frying pan with combined titanium and the non-stick coating was developed. It was so hard and durable that the pan used to be tested with a drill in front of prospective customers.

The 1990s saw a patented handle developed under the SCANPAN brand. Fixing the common issue of wear and tear leading to frying pan handles falling off, SCANPAN patented a handle that was cast together with the rest of the frying pan. This meant that it could never fall off. SCANPANS new handle, and other breakthroughs, were all a result of rigorous testing and review, fuelled by passion and curiosity combined with the skills and experienced craftsmanship needed to achieve continuous innovation.  This mentality remains at the heart of SCANPAN today.

In 2008, SCANPAN was the first manufacturer to claim all of our products were free from PFOA and PFOS. SCANPAN also minimises the environmental impact of their production by using metals such as stainless steel and 100 % recycled aluminium from used tins.

In the 2010s, with the invention of the induction cooker and its rising popularity, SCANPAN developed an induction friendly solution to their aluminium cookware, casting a stainless steel base on the bottom. This is just one of the ways that SCANPAN continues to reinvent and adjust its brand and products to remain the very best cookware, from 1956 and forever after.

Over ten years in the game

We aim to provide a superior quality of service to our customers, retailers, surfers and the media.

Wave championship has a 5 star Tripadvisor traveller rating and is also rated #1 for Speciality lodging in Baleal Beach, Peniche Portugal.