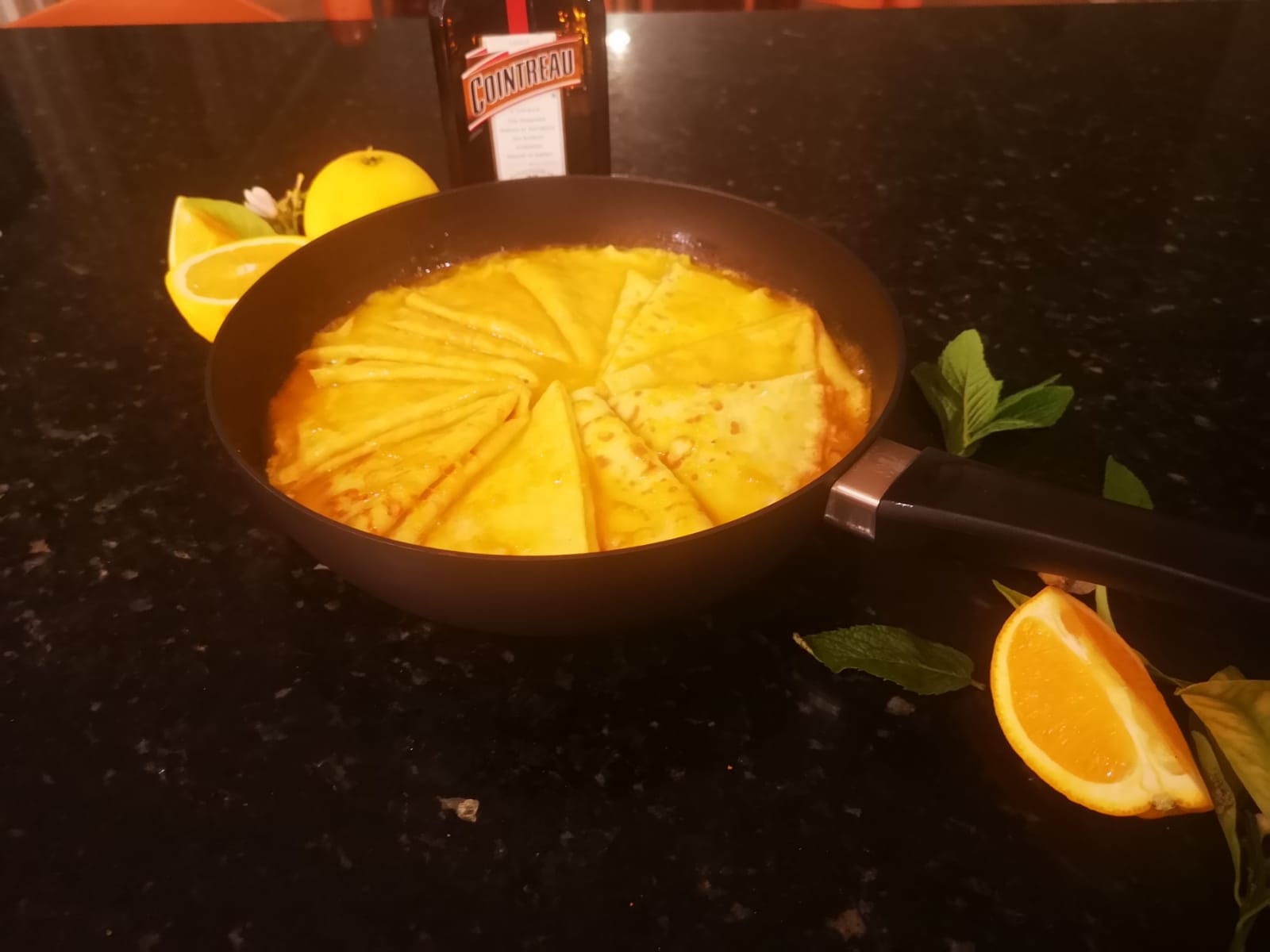 Although Crêpe Suzette is arguably one of the most famous French recipes, conflicting stories abound with regard to its namesake.

The most popular version of the story is that in 1895, a 14- year- old chef- trainee, named Henri Carpentier was preparing crêpes in liqueur for the Prince of Wales, the future King Edward VII. The dish accidentally burst into flames, but the young chef unabashedly carried to flaming pan to the table, and once the flame had died down, served the dish to the Prince and his party. The Prince was delighted, pronouncing them delicious, and asked what they were called. Originally, Chef Henri named them Crêpe Princess, wanting to honour the Prince, however as crêpe is a feminine word in French, it could not be named after the Prince directly. The Prince accepted the honour but asked for them to rather be named after his dinner Guest, a young French girl called Suzette.

We may never know for sure who the real Suzette was, but whatever her identity, the dish that bears her name remains a firm favourite in the hearts of crêpe lovers the world over.

These paper thin pancakes can be prepared up until a day before, all except the last minute sauce which truly does make the dish superb.

1. Beat the 3 eggs until fluffy and light in colour, and add the sugar. Continue beating the sugar into the eggs for a further minute.

2. Sift the flour and salt together. Add to the egg and sugar mixture and mix. Combine the milk and soda water and add the liquid gradually, beating to a smooth, creamy consistency.

3. Add the oil and orange liquer.

5. Using SCANPAN 24cm classic or IQ Fry Pan, you do not need to add any butter or non- stick spray, simply pour around 1/3 cup batter into the pan on a low heat. Swirl the pan so that the batter is evenly spread in a thin layer coating only the bottom of the pan, do not go up the sides.

6. Allow it to brown on the first side, and as you see bubbles forming underneath the crêpe and the sides begin to pull away from the pan slightly, slide a spatula underneath and flip the crêpe, cooking for a further minute or so, on the other side.

7. Store the crêpes on a plate in a pile, underneath a damp dishcloth in order to keep them from drying out until you have cooked all of your batter. It should make +- 10 crepes.

2. Cream the butter and slowly incorporate the sifted icing sugar

3. Add in the orange and lemon rind and mix until evenly combined

4. Spread the Suzette butter on each crepe and fold into quarters

1. Melt the butter in the same SCANPAN frying pan. The non-stick surface means it does not need to be washed in-between.

2. Then add all of the remaing ingredients at once

3. On a medium- low heat, stir the sauce until the sugar has dissolved and it starts gently bubbling on the edges of the pan.

4. Stop stirring at this point and let the sauce boil and reduce unhindered until it thickens to your desired consistency.

5. Place your filled and folded crepes inside the pan with the sauce, in a wheel formation, ensuring they are all covered.

6. Continue boiling for about 2 minutes until the sauce caramelises beautifully around the crepes.

– Warm a shot of brandy or orange liqueur and pour over the crepes, light it with a lighter, and serve. However, please note, flambéing the crêpes is actually not necessary at all and is merely done as a flourish for guests. If you do choose to do it, light the poured alcohol immediately so as to burn off the alcohol and not let the harsh flavour remain.